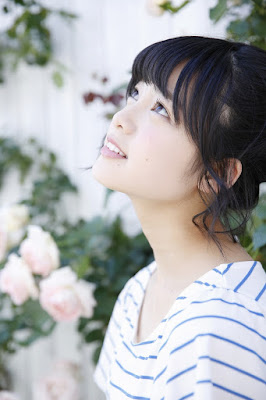 Here are translations of an interview with Hirate Yurina and then of her brief statements about the other members of Keyakizaka46. They were published with two Hustle Press photo collections that came out online around the beginning of June.

First is the interview:


Hirate Yurina – “Techi” – took on the position of centre for Keyakizaka46’s debut single, Silent Majority. She used to be a centre in basketball, too, and her athletic ability is outstanding. In a psychological test, she was judged most suited to be an idol out of all the group’s members. She’s the embodiment of potential.


But it can’t be forgotten that she is still in third-year middle school, and is 14 years old…! “Love stories” with that cherubic face?


By the way, when she entered Keyakizaka46, she was 160cm tall. Now she is 164cm. “It seems that I’m still growing.” Unrivalled centre…just how big will she become!?


In this series, each member gives us a 24-hour clock of her off-days…

Hirate: What can I do? It’s a nothing day. …this is really such boring stuff.

Honestly, nothing you say sounds that boring…. Before going to sleep, you say you spend two hours “in the futon.” What does that mean?

Neru tricks the fans with a faux bob

Just for people who came early, in the first session
I had my hair in a "just kidding" bob. 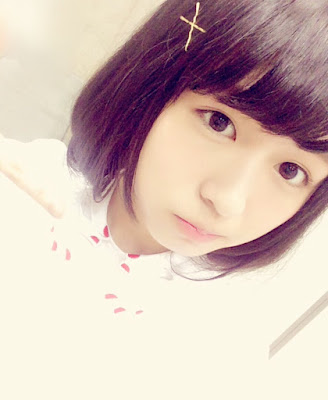 When anybody asked me if I'd cut my hair
I answered: "Yes!!"
Lots of people believed me.

Somehow, it ended up being pretty fun, lol.

Read more »
Posted by kenkyuusei at 20:52 No comments:

Imaizumi Yui on the new senbatsu

For Imaizumi Yui, it's a very different situation from Suzumoto Miyu, who has been dropped from the front line, or Watanabe Risa, who has been put there for the first time. She has just been moved one place away from the centre, but still prominent on the end of the front line.

Will it come out in the wash?

I spilled cafe au lait on a pure white dress.

"Throw it away!" I said to my mother.

It seems to have come out. What a relief!

It was the announcement of the senbatsu for the second single.

From the position I've been given, I want to show everyone a performance that only I can give.

With everyone together, I want to continue climbing the hill, bit by bit.

Read more »
Posted by kenkyuusei at 19:25 No comments:

Watanabe Risa's blog post on being named to the front line

On Sunday, the senbatsu selection for Keyakizaka46's second single was shown on their TV show, Keyakitte Kakenai? (Of course, the show was recorded a while ago and just broadcast Sunday night.)

Two excellent performers were dropped from the front line -- Suzumoto Miyu and Kobayashi Yui -- and two other members were raised: Shida Manaka and Watanabe Risa.

Yesterday on Keyakitte Kakenai, the senbatsu for the second single was announced.

First, I am truly happy that we have everyone in the senbatsu, and that I’ll be able to take part in activities with Neru.

Neru is an extremely hard worker. At the time of our first single, when we were in the midst of lessons, she came with us to the lessons.

When we were checking the choreography, Neru went ahead and took videos and collected together all the bits we needed to improve.

Just to think that I’ll be able to take part in activities with such a nice person as Neru makes me happy.

And now I have to talk about myself: I’ve been chosen for the front line.

I think there must be plenty of people wondering what I’m doing in the front line.

Even though it's me, I would probably disagree with anyone who didn't wonder.

Read more »
Posted by kenkyuusei at 17:19 No comments:

Suzumoto Miyu on being dropped to the second line

We only saw the Keyakizak46 senbatsu announcement on TV yesterday, but it really took place some weeks ago. So Miyu-chan has had time to get used to being replaced in the front line.

She's upset, but she seems to be taking it well. Personally, I think she's both the most beautiful member of K46 and the best dancer, and that she added a lot to the Silent Majority MV. And I think otaku antipathy toward her is misplaced, based on mis-perceptions and misunderstandings. She's a shy person who can come across as standoffish.

Anyway, here's her blog post for Monday evening, 24 hours after the TV broadcast, and the day after the big handshake event in Yokohama:

On Keyakitte, Kakenai? yesterday, the senbatsu for the 2nd single was announced.
Honestly, I'm terribly upset.
But I'm just going to face forward
and work hard with all my strength on the 2nd single.

Still, it makes me so happy that the fans are watching over me.
Please continue to treat me well from now on.

For the 2nd single, all 21 of us, including Nagahama Neru, will be making things lively!!
Look forward to it!!!!

Read more »
Posted by kenkyuusei at 14:03 No comments: