Today was the individual handshake event!
Since it's close to Christmas,
I wore an outfit that would make it seem like a Christmas date ♥ 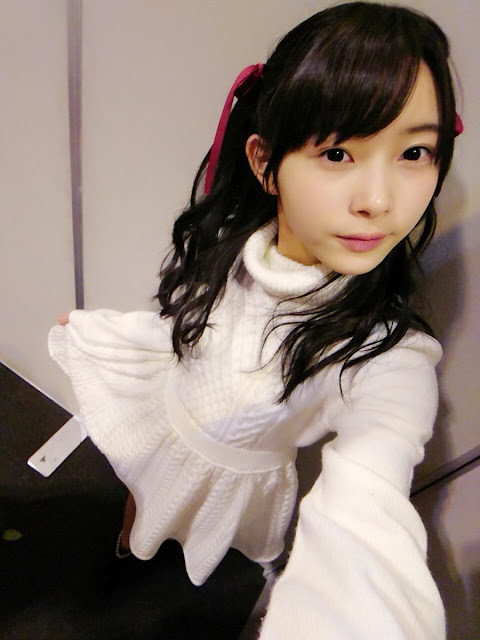 Read more »
Posted by kenkyuusei at 21:19 No comments:

So many great blog posts, so little time. Here are more photos from FNS and after -- this time without outsiders, only Keyaki-chans.


Keyakizaka46 members have produced some great blog posts about the second night of the FNS song festival on Wednesday, but there are so many that I've had trouble deciding what to do with them. Finally, in desperation, here are some photos of Keyaki-chans with friends and idols from the idol world -- with captions bringing in some of what the members said.

The first photo isn't from a blog, but had to be shown: Hirate Yurina with Watanabe Mayu -- Techi and Mayuyu -- in a mixed group of idol all-stars doing AKB's Heavy Rotation: 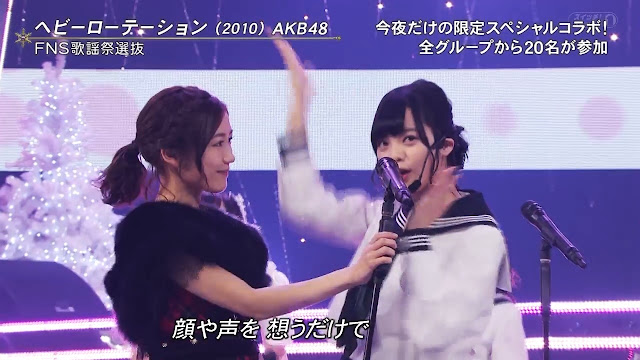 Read more »
Posted by kenkyuusei at 15:59 No comments:

Satou Shiori "at my limit"

Whoa! Amazing blog post put up a few hours ago by Satou Shiori of Keyakizaka46. Title: "At my limit."

She says that going to art college and being an idol at the same time is stretching her to her absolute limit. She can't try any harder. She has dreamed of art school since she was little. Being a member of Keyakizaka46 and going to art college are both decisions she has made herself. But she feels that doing either of them well involves short-changing the other.

Right now she is putting all her efforts into the one-man live next week, which has been one of the group's goals. She wants to give a good performance both for the fans' sake, and for the other members' sake.

She has thought of quitting art college. But she has also wondered what Keyakizaka would be like without her.

What a bombshell to drop just before Christmas. Here's her pic from the post: 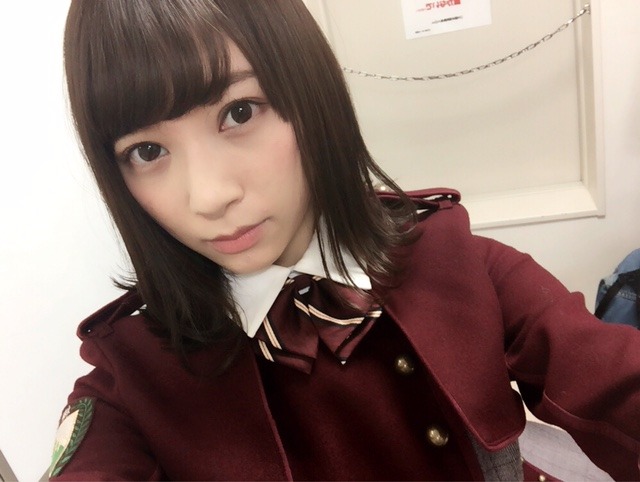 Looking for a job? Managers wanted for Keyakizaka46

Seed & Flower, the company managing Keyakizaka46 (and responsible for its uniforms, including the "Nazi" uniform) is advertising for managers both for the group and for individual members. Perhaps they are expecting more work and hiring to handle it and look after the members. The low basic requirements suggest that these are entry-level jobs for aspiring managers. The pay is about US$2000 a month. Here's a translation of the ad:

Taking applications for managers for Keyakizaka46, the second in the Sakamichi Series after Nogizaka46! Group and members will have many opportunities to appear in all forms of media. Seeking applicants with or without experience, but who are overflowing with desire and are interested in the entertainment industry, and who as staff will be able to convey passion to fans.

Read more »
Posted by kenkyuusei at 21:36 No comments:

It was another step up the hill for Keyakizaka46 Wednesday night at the second night of Fuji TV's FNS Song Festival.

Neru was the big winner, in my opinion. In beginning Mannequin, she was preceded by two beautiful young members of Nogi 3gen...but when Neru came forward with her unsmiling smile, she brought an aura of peace and power. And she proved by her sharp dancing there that she actually can be a centre. Search stats show she was by far the most searched member of the new groups.

Read more »
Posted by kenkyuusei at 12:48 No comments:

This is the big day: Hiragana will perform for the first time live on TV, and on the big Fuji network, available everywhere in Japan free, by terrestrial TV rather than cable or satellite.

And Kanji Keyaki will perform, too -- but not as much as last week. And anyway, this is all old hat to them, now. Just one more chance to fix themselves in the public's mind as stars.

The Hiraganas all say they have practiced and practiced and are ready for this...but that they are also extremely nervous. Memi's heart is beating hard. Kage-chan can't concentrate on anything. Tears are coming to Kumi's eyes. Takamoto says it's scary...but she's going to be positive and work hard.

Kyonko says nothing about being scared. She just wants everyone to watch. Kage-chan says: "Let's go!!" and invites everyone to enjoy watching. She says her aim is to make sure she can be seen as much as possible. "Look for Yuuka! she says."


Takase Mana says she is so grateful for this opportunity, and will learn a lot. She wants to perform so people say: "That Hiragana, they're pretty good!"

Read more »
Posted by kenkyuusei at 19:55 No comments: 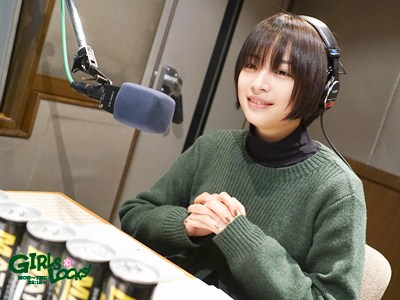 "You're listening to Silent Majority by Keyakizaka46. I've known them all along, but I just recently watched them properly on TV. ...now I reaaaaly want to support them. What dancing! And still I find their music so soothing. They're my number one interest right now!!"

Hirose-san is an 18-year-old model, actress, and TV personality who is also one of the regular hosts of School of Lock.

Since 2013, she has done eight TV dramas, nine films, and 42 TV commercials. She has been an exclusive model with Japanese Seventeen since 2012. She has put out calendars for each of the past four years, has photo books, etc., etc. A good supporter for K46 to have: young and famous.

In her blog today, Hirate speaks of the new goods just announced on the official site. There are new oshi towels in the colours each member has chosen for her support colours.

Hirate's towel is green and purple, but she writes a post to declare that these are the Keyakizaka46 colours, not her personal colours.

She says she believes in colours for songs, not for people. She chose green x green for Yamanotesen, and red x red for PARCO. 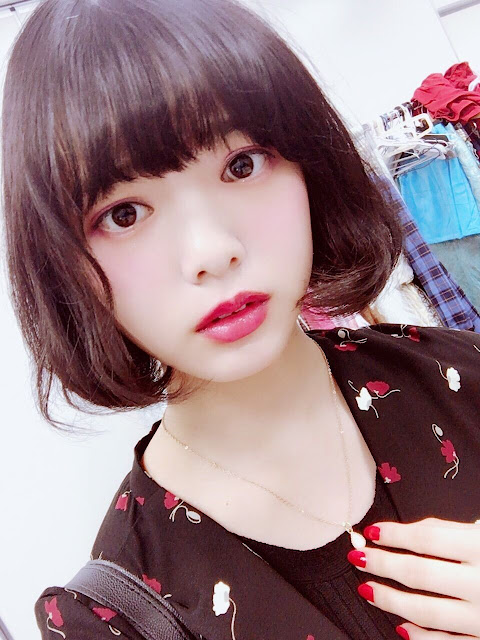 Yurina is the fixed centre and the public symbol of Keyakizaka46, but she does what she can to take the focus off herself and put it on the group. And maybe this gives her a bit of a feeling of independence, little of it as she really has.

Nagahama Neru's calligraphy is now on display at a Shinto shrine in Tokyo.

In the December issue of Brody magazine, Neru is shown doing calligraphy at a West Tokyo shrine. It is part of series in which Neru and Hirate learn traditional Japanese arts. Hirate has done karate, Neru tea ceremony and calligraphy.

At the time, the calligraphy master under whom Neru was working praised her work, saying that she could show the best of it anywhere without embarrassment. Wow.

Now the shrine has put the biggest piece -- the character kokoro "heart," done with a brush four feet long -- on display in its sacred-dance pavilion. (click images to enlarge) 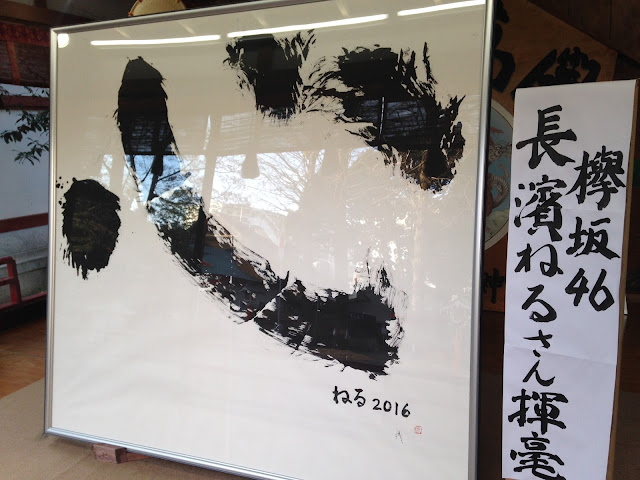 Read more »
Posted by kenkyuusei at 11:15 No comments:

The Hiragana Keyaki Omotenashikai was such a success that they have already had it on TV once and are planning an extended version next Sunday at 9 pm, Japan time, on TBS.

The Hiraganas' performance of Dare Yori mo Takaku Tobe on the special Keyakizaka46 show this weekend was a big step up from their already entertaining MV.

My enjoyment of them is only rising -- as it is for the main Kanji Keyaki group, as well.

Of curse, Memi is the one who always seems to find a way to intrigue me. Like this: 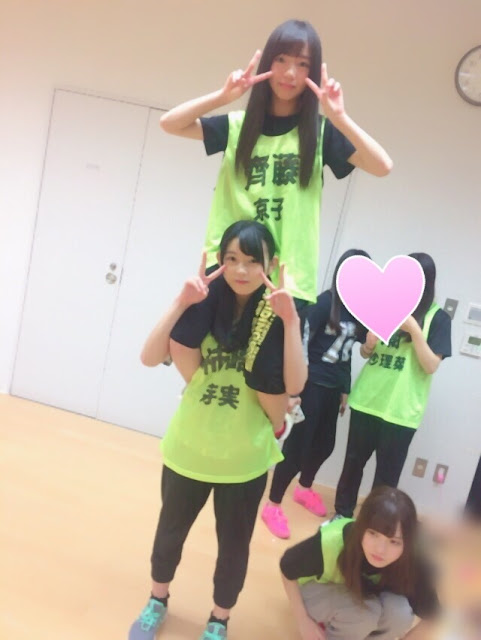 That's Kakizaki Memi (3rd year middle school) with Saitou Kyouko (1st year university) on her shoulders. Memi is a strange kind of frilly French doll: one with the strength to carry her seniors on her shoulders. Kyonko is slight, but Memi does have more grip strength than any Kanji Keyaki member did at their athletic event a year ago. And she has run almost as fast a 50m as the top runner, Akanen. Her calves are noticeably solid.

Read more »
Posted by kenkyuusei at 22:34 No comments: